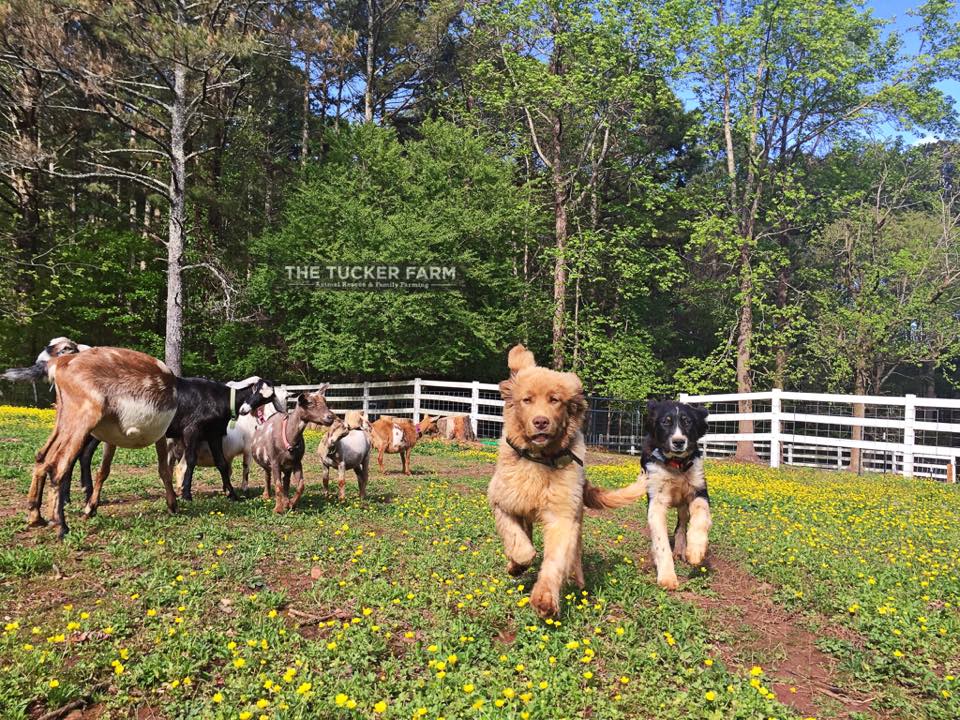 At 6 months old, the puppies were awkward and gangly. Petra and Boris tripped over their own legs and couldn’t keep an ounce of fat on them as they grew. As naughty as this duo was (like all puppies), they always remained sweet with me and my family. In fact, I never had to teach Petra and Boris not to jump up on humans. I don’t know if it was because they already had their mental and physical needs met, but I’m not complaining. Their manners were excellent.

As gentle and considerate as the puppies were with me and my family, that wasn’t always the case with the goats.

Let me start by saying, goats are not always the smartest animals. There is a reason goats are not herded like sheep. Goats can be spastic, spooky, and just plain crazy at times. You know what that looks like to a huge puppy? FUN! FUN! FUN!

Luckily, Petra and Boris had each other to play with and tuckered themselves out. That said, sometimes, especially on rainy days, the duo would get bored… and boredom was often cured by chasing and harassing a few goats. While the mischievous pups were having a blast, I was not amused. These dogs were supposed to bond and protect my goats, not terrify them!

I reminded myself it was just a phase and they would grow out of the puppy stage. But when?! I watched them interact with the goats as often as possible. If I saw Petra and Boris wanting to play or chase a goat they were issued a firm verbal warning. Luckily, this pair was sensitive to my assertive attitude and they would heed my warnings. When I wasn’t available to watch Petra and Boris, they were put in pastures separate from the goats. They could still see the goats, but they could not not use them as play toys.

The puppies kept growing and maturing – mentally and physically. Soon I was able to trust them for longer periods of time alone with the goats. I knew things were getting better when one afternoon I caught the goats snuggling with the dogs. The goats were finally starting to trust their big, furry protectors.

Unfortunately, that image didn’t last for long. We had an excessive rainy season when Petra and Boris were not yet mature. The goats rarely left the barn and the dogs were usually with them as well. I happened to be in the barn one day, when I heard a loud thud against wall, followed by several more. I went to investigate and found the dogs rough-housing with an adult goat who was cornered. Sigh. Back to square one.

I’m not the most patient person, so I’ll admit I was losing my tolerance with these “lions.” Kidding season was approaching and the puppies were close to their first Birthday. I needed Petra and Boris to work!